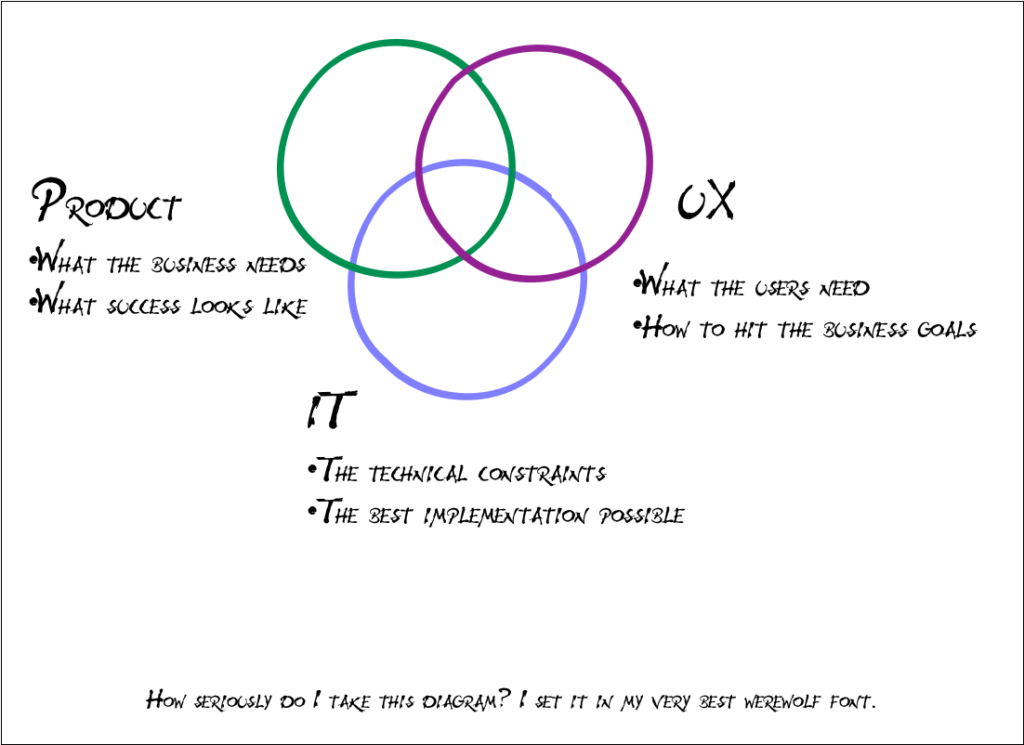 In the real world, I’ve found, the circles of influence aren’t equally weighted. Product owns the purse strings, so generally they get what they need or the project is cancelled. If IT decides it’s not going to build what Product or UX request, well, nothing gets built[4]or the wrong thing gets built, or in desperate cases the whole thing gets built in an Excel spreadsheet with a thousand macros by a Product person who could be doing something better with their time.

But if UX is the one out of alignment with the others, well, it doesn’t take much for Product and Business to build and ship without UX input—it happens all the time in our tiny corner of the universe.

We have to own and harness our ability to influence others. We have to show that while we may not necessarily have been granted the authority to make decisions, we are the authorities in making those decisions.

There are two ways to gain authority:

In general, you can do them in either order but it helps to do both.

That’s where responsibility and ownership come in. For the purposes of this post we’re going to use “responsibility” and “ownership” interchangeably. Showing responsibility is a surprisingly powerful force when it comes to communication and getting things done. Responsibility means:

And none of these skills are going to make us rockstar designers. There’s no guarantee that they’ll confer extra creativity, speed, or talent. They won’t make us famous and they probably won’t make us stinking rich. They will make us sturdy, reliable designers.

When we work on the skills above, we show that we’re consistently putting in the effort to make the team successful. We prove that we know what we’re talking about—and we prove that when we do make mistakes, we’re transparent about them. We gain trust from our teammates and our management team, and we gain authority through that trust. We clearly communicate our value and we lead others, not through coercion but through effort, to recognize that value.

While there are a few places where where Design is so baked into the culture that a UX Designer has the authority to stop a project in its tracks, they are still rare, and chances are most of us don’t work there.

For the rest of us, our authority and our influence grows when we increase our peers’ respect for us both as Designers and as people. That growth is driven directly from our own actions. We must transparently and consistently not only prove that we know what we’re talking about, but also that we are willing to do the hard work of clear communication, keeping our word, and making it easy for others to work with us.

When faced with a problem that can be solved by taking the easy route, or by owning our role, we should own it.