Friends, I just received word that our own Talisha Payton died on July 15. A member of her family reached out to me via email. Talisha was one of the strongest, most independent, and determined designers I ever met. She was determined to do the best she could in our industry and in our lives regardless of what life threw at her, and life threw a lot at her.

Her family described her this way:

Talisha excelled at every task she took on while remaining humble throughout her life. She was known by family and friends to be kind, smart, and had the willingness to help others thrive.

Her signature phase was, “Get it done!” She loved to ask questions, dance, and eat Tacos.

We couldn’t agree more. Anne worked with Talisha at Vanguard, where she was determined to find a way into UX Design. After leaving Vanguard, Talisha earned her Master’s in User Experience and Interactive Design, while simultaneously gaining experience in the industry and exploring her passion at different positions in the area.

Talisha was an energetic designer, and an energetic writer for us here at The Interconnected. We are proud and honored to have published her posts. We are heartbroken that we won’t have the opportunity to work and hang out with her again. 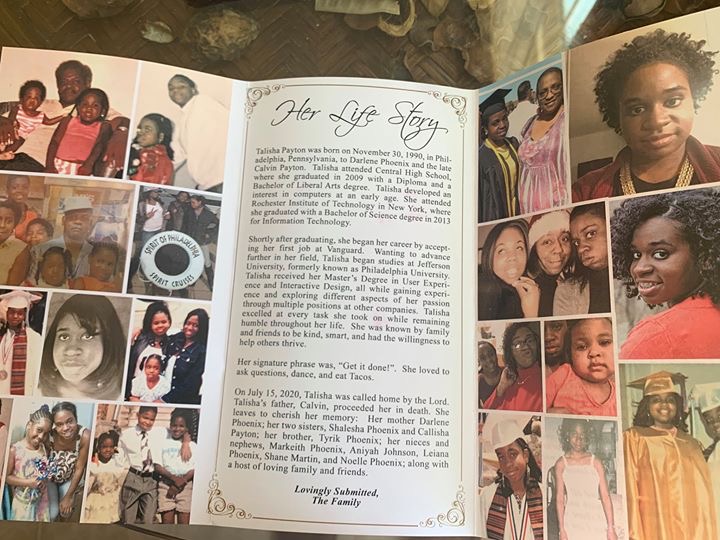 Transcript of Her Life Story:

Talisha Payton was born on November 30, 1990, in Philadelphia, Pennsylvania, to Darlene Phoenix and the late Calvin Payton.  Talisha attended Central High School, where she graduated in 2009 with a Diploma and a Bachelor of Liberal Arts degree. Talisha developed an interest in computers at an early age. She attended Rochester Institute of Technology in New York, where she graduated with a Bachelor of Science degree in 2013 for Information Technology.

Shortly after graduating, she began her career by accepting her first job at Vanguard. Wanting to advance further in her field, Talisha began studies at Jefferson University, formerly known as Philadelphia University. Talisha received her Master’s Degree in User Experience and Interactive Design, all while gaining experience and exploring different aspects of her passion through multiple positions at other companies. Talisha excelled at every task she took on while remaining humble throughout her life. She was known by family and friends to be kind, smart, and had the willingness to help others thrive.

Her signature phrase was, “Get it done!”.  She loved to ask questions, dance, and eat Tacos.

On July 15, 2020, Talisha was called home by the Lord. Talisha’s father, Calvin, proceeded her in death. She leaves to cherish her memory: Her mother Darlene Phoenix; her two sisters, Shalesha Phoenix and Callisha Payton; her brother, Tyrik Phoenixl; her nieces and nephews, Markeith Phoenix, Aniya Johnson, Leiana Phoenix, Shane Martin, and Noelle Phoenix; along with a host of loving family and friends.

This is about Talisha, and it’s also about suicide. Please, if any of you ever feel like it’s all just too much pain and you can’t deal anymore, reach out to a trusted friend or family member or acquaintance. If you can’t reach anyone local,   call 1-800-273-8255 and talk to someone on the National Suicide Prevention Hotline.

This industry is hard. You are not alone. Mental illness is real, the pain is real, and brains lie all the time. All of us at The Interconnected have been down some damned dark roads, and there are likely more ahead. But we love you, and those roads are easier when we stick together.