Back in February, I wrote about the events that brought about the Alphabet of Accessibility post on The Pastry Box, and I hinted I might have a deck of cards to accompany it soon.

I opened the mail today and discovered that my prototype deck arrived. The Alphabet of Accessibility Deck is a real thing you can purchase with actual money from over at The Gamecrafter. 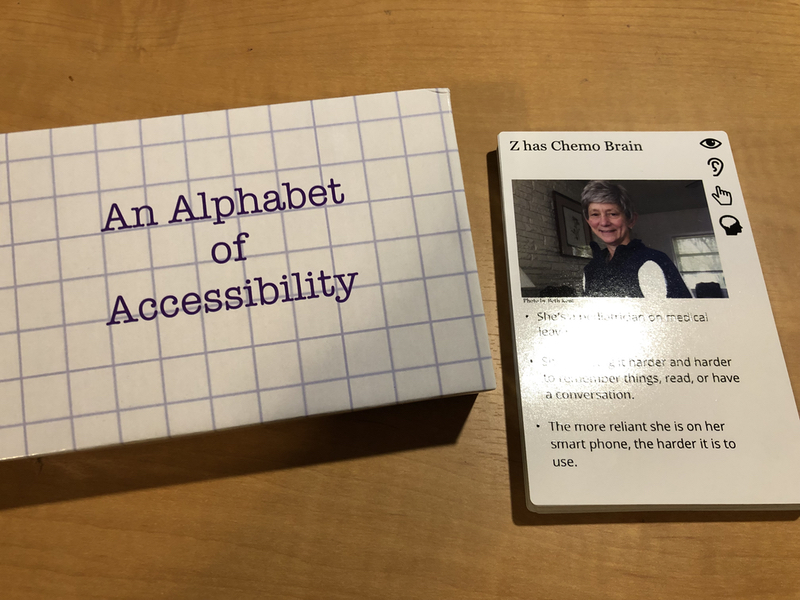 I’m a little overwhelmed. When I wrote the original alphabet back in 2014, I certainly didn’t expect it would ever become a talk, much less a talk, a deck of cards, and a half-formed workshop.

But here we are, dragging the world forward kicking and screaming into the Century of the Anchovy, as Terry Pratchett would put it. And you can buy the deck and share it with your teams or your organizations or whatever you’d like.

Many thanks to Dylan Wilbanks, Jeff Eaton, Sarah Hoffman, Elaine Nelson, and Greg Dunlap (as well as many others!) for encouragement, sanity checks, and pointing me to The Gamecrafter. And all of my friends and family, who will continue to remain nameless, for their love, support, and well-earned right to complain about the things we still don’t get right when we design.