Humans are natural storytellers. We tell our partners, our family, our friends how our days are. We tell our colleagues stories of that thing the client asked for in a meeting (and possibly how absurd it is). We tell ourselves stories about the day ahead of us (I’m going to go to work, get groceries, and see a friend for dinner).

Storytelling is a natural part of who we are, but why does it seem so daunting?

Since 2005, I have been involved with improvisational theater. While there is a solid 8-year gap in my practice, the mindset has been invaluable to me as a researcher, designer, and collaborator. Over the last year, I have organized my thoughts into a full book, Collaborative Improv,  a reference full of activities and parallels about collaboration and performing.

As The Interconnected is about the Human Connections, I want to highlight a few key aspects of improvisation that help us connect to one another and tell our stories.

Listen to each other. One of the main lessons from improvisation is active listening. Being in the moment and processing what we are being told, not what we want to say next. So much of our lives in meetings are based around wanting to be heard, wanting to be seen as smart or relevant. If we can put our personal desire to excel aside for a moment, we will realize that the old adage “a rising tide raises all ships” is true and the team’s success is our individual success.

Good stories come when we listen to what we are being told and respond in a genuine way that adds to the narrative. We don’t want to respond off-topic, changing the focus. We want to answer the question. We want to solve the problem. We want to come to consensus.

Be genuine. One key difference between good improv and bad improv is that bad improv is “phoned in”. The performers aren’t really there and the characters are flat, disingenuous. Improvisation has taught me how to apply my whole self to the craft and to expose my characters to the audience. Much the same way, when we design just the surface of a product, we are doing a disservice to our colleagues, our stakeholders, and our customers. Personas and journey maps are invaluable in illustrating the details of why we are designing a solution. And challenging ourselves to understand the motivations behind our work is key.

The more we can bring real, genuine details and empathy to our customers and our stakeholders, the more we can understand that a difference in opinions is based on individual needs and not arbitrary whims. This leads us to seek motivations.

Seek motivations. This includes the motivations of our business, of our customers, and of ourselves. The business may want to differentiate from their competition. Why? Seek understanding of that motivation. The customers may want to gain more approvals for a higher productivity score. Explore the business culture this lives in. And we want to design the best product we can, but what truly motivates us? Improvisation is a tool to be used to look at product design, human connection, and collaboration.

In a world where there is an onslaught of “how to be a better designer” books, I don’t mean to add to the onslaught. Instead, I hope to offer a vocabulary and lens that can supercharge the skills and abilities you already have. Collaborative Improv is now available on Amazon with additional content available on the book’s companion site, CollaborativeImprov.com.

I usually have captions on for most videos/streaming, although I tend to turn them off on YouTube – because most of them are awful. Even major video producers seem to use automated captions that have barely been cleaned up. I can hear well enough that it’s easy to tell that they’re wildly inaccurate, they’re poorly formatted, and it’s often impossible to tell who’s talking on a video with more than one person.

But over the last few months, I’ve been pleasantly surprised by the folks at Polygon. I’m a long-time fan of the Monster Factory series, for which the captions have been somewhere between mediocre and competent.

In the last year or so, Polygon has upped their game, and I think it’s worth pointing out as an example of YouTube captioning done very well.

In addition to being clear, readable, and accurate, these captions go above and beyond to deliver a great experience for the caption-reading audience. They get the basics right and make captioning not just bearable but enjoyable for those of us who use them regularly.

Screenshots[1]Unraveled screenshots are via the Unraveled Out of Context Twitter account, just so I didn’t have to spend four hours taking a few dozen screenshots. Thanks, I GUESS, to Dylan for noting that … Continue reading below are all from Unraveled, which is an ongoing series of video game explainers. It’s one of the smartest, funniest things on the internet right now in any format, and the captions are a great part of that. These exemplify the work that Polygon is doing with captioning.

— Unraveled Out Of Context (@nocontextunrav) January 5, 2019

[image description: Brian David Gilbert, host of Unraveled, a younger white man in a suit and glasses (hereafter BDG), stands in front of a board with little pieces of paper, overlaid with a graphic of a basketball. Caption reads So we have “Adult Link,” “Child Link,” “Basketball.”]

Clearly indicating who is speaking:

— Unraveled Out Of Context (@nocontextunrav) January 7, 2019

[image description: Tweet contains four images, each is a split screen of what appears to be a Skype call with BDG on the right and his mother on the left. Each image is captioned with a line of dialogue from one or the other, starting with Mom – “I can’t tell you how, what an exciting time this is for me.”]

Including the fumbling of normal human speech:

— Unraveled Out Of Context (@nocontextunrav) January 1, 2019

[image description: BDG standing in front of a whiteboard with what looks like a complex formula. Caption reads I actually have… um, I’m a little confused now.]

— Unraveled Out Of Context (@nocontextunrav) January 3, 2019

[image description: Split screen of headshots, BDG on the right, his mother on the left. Caption reads Mom – *sings the entire Tetris song*]

Showing changes in speech volume (in the time-honored format of ALL CAPS IS SHOUTING):

[image description: two images, both of BDG standing in front of a board with many little pieces of paper with the only readable words being “TENETS OF THE SONIC BIBLE”. Captions read THEN EITHER SONIC IS A GOD/OR COULD KILL GOD]

Making important points important (in this case, there’s also some verbal emphasis, so it’s both indicating something important in the content and the sound that goes with that emphasis):

Not just describing a sound, but giving it emotional context:

[image description: three images of BDG in the same as the previous image, but close up, with expressions of increasingly uncomfortable laughter. Captions read *frightening laughter*/*pained laughter*/*pain*]

And then, sometimes, just commentary on the action. Is this overkill? Maybe. Does it increase my enjoyment of the experience, as someone who uses captions regularly? Absolutely.

[image description: BDG in a convention hall, sitting on the floor with his hair over his eyes. Caption reads *sits sadly*]

[image description: BDG standing in front of a board covered with small pieces of paper, some are renderings of video game characters, others have military ranks written on them. Caption reads *realizing an unfortunate truth*]

So: yay Polygon! Nice work! Unfortunately, it’s not quite perfect. My main gripe: captions overlaying text on the screen. Videos in this series often include extra textual information, like this Dark Souls Boss Title Generator:

[image description: rules for a Dark Souls Boss Title Generator using the first letter of your last name and the day you were born. No captions. (and no, I’m not typing out the whole thing. my apologies)]

I’ve “had” to watch them multiple times to be able to see the video with captioning, as well as the text covered by that captioning.

Occasionally these are the same thing: when someone is talking offscreen, there’s often text on the screen that’s both the same as the captions, and overlapping the captions. A true screenshot of this in context would have caption overlapping the the “Pat (offscreen)” text, unfortunately!

[image description: two images of BDG standing in front of a board with a grid of strings with a listing of military ranks down the left side. The first image has open-captioned text reading Pat (offscreen): Look at this Galoomba!. The second has closed-captions reading Brian: LOOK AT THIS GALOOMBA!]

Honestly, I think the solution should probably come from YouTube, with an option for a captions bar to appear below the video. In the meantime, it would be great if video creators took captioning into account in creating those visuals. (A lot like postcards and magazines design in areas for address labels and post office stickers, perhaps.)

And these aren’t just features of a single Polygon series! Below is a screenshot[2]I actually took this screenshot myself, so I can use real alt text. from a video about what makes a good Star Wars game, and it has both great captioning, showing that the presenter is making a very specific noise, and not so great, because the captions overlay a bit of text in the video: 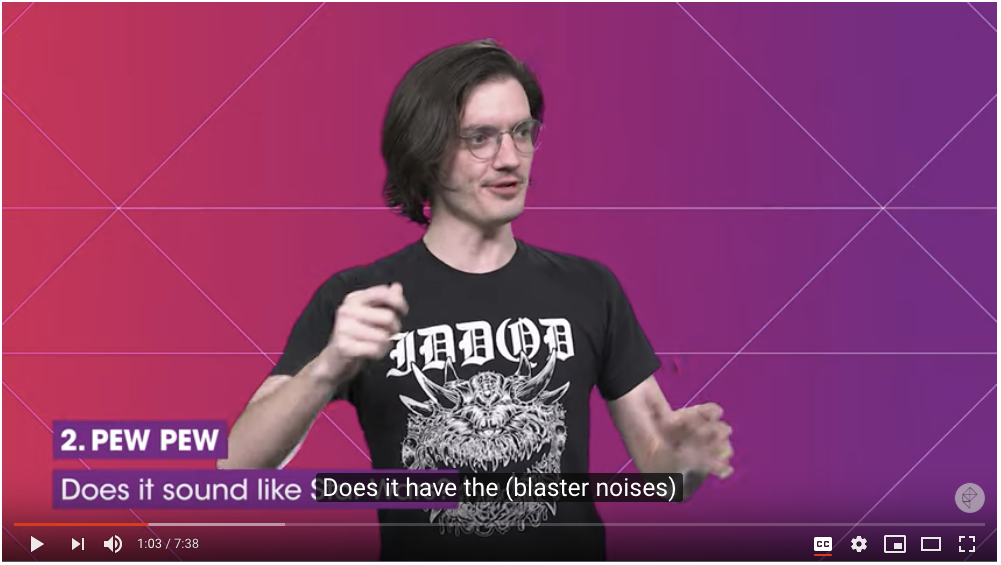 But in comparison to other YouTube video creators, the folks at Polygon are doing a truly admirable job in making accessible work that is both competent and enjoyable. I hope others follow in their footsteps. [3]Bon Appétit, I’m looking at you.