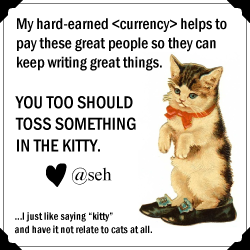 Inspired by a recent flight and tweetstorm.

Baggage fees are a fun game, aren’t they?

It used to be that airlines assumed you were going to check a bag. Fees were only charged to consumers if they were taking more bags than usual. Until American charging for bags over 50 lbs in 2002, the money that airlines paid to ship bags along with their passengers were just considered part of the cost of doing business. That was an experience design decision, whether the company labelled it as such or not.

When gasoline costs rose to $150 a barrel in 2008, most airlines added baggage fees to offset the gasoline costs. That was also a design decision, or a series of them, because the companies had to figure out how to communicate the changes, collect the fees, enforce the changes and the fees, and what the impacts to the flying experience to expect.

In 2010, the IRS said that those fees were tax-free, which pretty much guaranteed that they’re never going to go away. (That was also a design decision, but “don’t change anything” is a pretty easy decision to implement.) In 2010, baggage fees cost fliers somewhere around $2,569,729,000.

But it’s also changed the way that people fly.

Before 2008, business travelers were the only people I associated with carry-on bags. The rest of us checked our suitcases so they were out of the way and only brought on the plane the things we needed while on a plane. A carry-on might consist of the camera or valuables you were afraid would be stolen from a checked bag, books, a change of clothes (in case luggage was lost, which happened frequently) and whatever was necessary to keep the kids occupied on the flight. Purses or other bags might go under the seat if you were short and didn’t want to fetch something above your head mid-flight, but there was enough room in the overhead bins that everything else — camera bags, shopping bags with souvenirs, odd-shaped items — were out of the way.

Yesterday I flew from Seattle to Philadelphia on an A231. Seating around 180 passengers, the flight was full. Had we all checked bags at around $25 each, the airline would’ve grossed about $4,500 in bag fees.

But we’re humans, so if we don’t have to spend money check a bag, we don’t. I mean seriously, the bag check process is already a pain in the butt: taking it to the check-in area, having it weighed so they can see if they can squeeze some more $$ out of you, getting it tagged, then having to pick it up on the other side of the flight from the always-slower-than-desired baggage carousel. Could the airlines redesign this process? Probably, but they haven’t.

Users make experience design decisions too, mostly about what they’ll do to make an experience easier on themselves. Since baggage fees have been introduced, more and more people have learned the art of stuffing as much as two weeks of clothes in a single carry-on suitcase.  That’s in addition to the backpack or purse or messenger bag or briefcase (termed “personal item” by the airlines) for their various electronics and assorted entertainment. Since it’s 2017, we’re carrying a whole lot more in that personal item than we ever needed in the past.

We had roughly 150 people planning a free-for-all to stuff their lives into the overhead compartments.  The A231 was built in 1997 and definitely not designed for the post-2008 bagpocalypse. We were told 30 minutes before boarding that some of the folks at the gate were going to have to check their bags. This process was, you guessed it, somebody’s design decision.

Me, I was banking on this stage of the game. Because that’s what it’s become: a game. The object: pay as little as possible to get bag from point A to point B with as little inconvenience to me as possible.

The rules are simple:

Both to and from Seattle, my bag flew for free in the cargo area, because I knew the rules of the game.

The decisions the airlines have made were designed. I can’t say with confidence that they were designed to social engineer their customers, but that was the result. Maybe to the airlines it’s a win on both sides: passengers surely pack lighter than they did 20 years ago, which makes gasoline costs lower, and airlines collect a fee to check bags that offsets the gasoline and baggage transportation costs with some profit to spare. Even giving those of us playing the game a free checked bag at the gate, the airlines came out ahead…. on baggage costs.

In terms of money lost to flight delays, I’m not sure my trip to and from Seattle was as profitable.  We were delayed 12 minutes taking off because of the bag circus on the plane.

Obviously, not every delayed flight is due to baggage handling.  On the other hand, both of my flights were late, one by 44 minutes and the other by 47, and the baggage circus had a visible and obvious impact on the lateness of both flights.

In 2010, the FAA estimated that flight delays were costing airlines $8 billion a year and passengers $17 billion.

$8 billion in lost money is a lot higher than $2.5 billion in baggage fees.

But why would passengers tolerate losing $17 billion when they could save that money by cooperating with the airlines? Surely $25 in checked bags to help the plane take off earlier is worth the money at that point.

This is where brand equity comes into play, or rather, lack thereof. The airline industry as a whole has made design decisions that communicate to the passengers they’d rather charge us $25 a bag — which causes both them and us hassle — than make luggage handling easy or inexpensive or both. They’ve also made it clear that flights are going to be late. Some of them have a distinct reputation for it. That’s also a design decision.

When your customers expect that you’re going to pick their pocket at every opportunity, and they expect that you’ll be late whether they do their best to speed along the process or not, they’re disincentivized to help your business run smoothly.

In other words, we, the passengers, gave not one shit that we delayed the flight. We were busy trying to cram 150 bags into not-enough-space. We were tying up the aisle trying to move against traffic because we had to stuff bags in overhead bins that rightfully “belonged” to people 20 rows behind us.

(Or we were trying to finish the last 20% of The Hunger Games while the circus went on around us. Maybe that was only me, but I doubt it.)

(To add insult to injury, the flight boarded front-to-back -definitely not the fastest way to board an airplane – and it seemed like it was specifically to ensure the people paying the most for seats at the front of the plane got a crack at the overhead bins first. That was a design decision to communicate to customers who was valued and who wasn’t.)

As designers, we have a responsibility to both our clients and our users to look at how we incentivize behavior through design. We need to expect behavior changes by our end-users when we change a process. We need to expect that those behavior changes won’t always be positive and consider what someone who has no desire to help the company would do when faced with an annoying process or feature or cost.

Only then can we help the businesses we design for decide whether the cost to brand equity, performance, and cost, is worth $25 per bag.

And if we don’t? Someone who thinks $2.5 billion in bag fees is good experience design will do it for us.